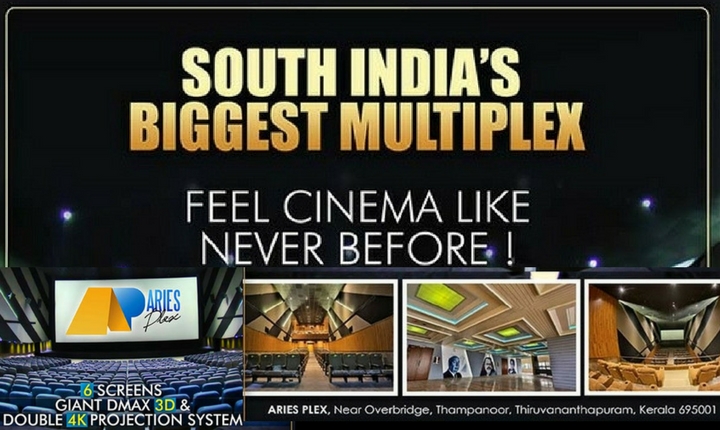 Moviegoers in the city can now enjoy one more multiplex experience.  The 35 year old SL Cinemas, now known as AriesPlex has been transformed into a state-of-the-art multiplex offering a whole new viewing experience to the cine goers.

The Athulya Theatre inside the complex has undergone a metamorphosis and the result is a giant Dmax 3D Screen. DMAX 3D screen, is a Chinese equivalent of IMAX 3D. The screen has a length of 72 feet and a width 30 feet. Athulya will also have double 4K projection system with a luminance of 66,000. Currently the only 4K projection system in south India is located at Tiruchirappalli. That’s not all. Athulya will also have the latest Dolby Atmos sound system with 64-channel speakers. The revamp includes the best in comfy seats with more leg room. According to AriesPlex you watch the movie at the same level of comfort you have at home.

Meanwhile, screens Athira and Aswathy will get 2K projection system with Silver screens and 5.1 DTS system. In Athira, there will not be any seats but only comfy sofas. Athira will also get ‘Spectacular 3D projection’, first of its kind in South India. Aswathy won’t have any releases and will be used for screening special shows for students and conducting exhibitions. The work on the Anjali will start soon. It’s learnt that, Anjali will be split into 3 little theatres. When AriesPlex is fully fledged, it will have a total of 6 screens.

AriesPlex will also have facilities like food courts, elevators, escalators and a massive car parking space. Escalators have already been installed.

The theatre has been leased to director Sohan Roy’s Aries Group of Companies for a period of 20 years. In a recent acquisition, Aries Group has acquired Vismayas Max Studios, one of the leading post production studios in South India.